You can interpret the results of two-way ANOVA by looking at the P values, and especially at multiple comparisons. Many scientists ignore the ANOVA table. But if you are curious in the details, this page explains how the ANOVA table is calculated.

I entered data with two rows, three columns, and three side-by-side replicates per cell. No missing values. So 18 values entered in all. Prism file. 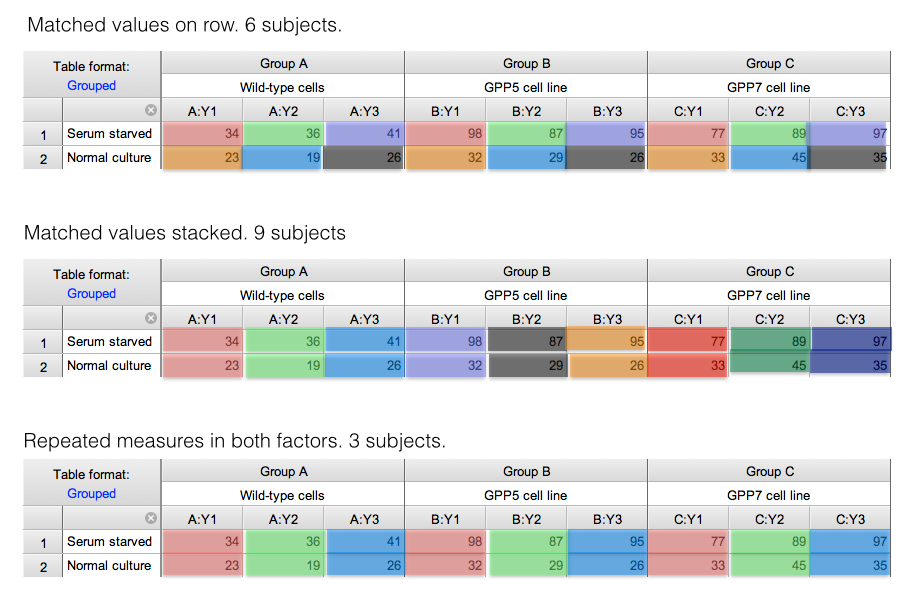 Here are the ANOVA tables for the four conditions. These values are all reported by Prism. I rearranged and renamed a bit so the four can be shown on one table (Excel file).

How to report two-way ANOVA results in a table

Focus first on the sum-of-squares (SS) column with no repeated measures:

Now look at the SS columns for the analyses of the same data but with various assumptions about repeated measures.

Now look at the DF values.

Each mean square value is computed by dividing a sum-of-squares value by the corresponding degrees of freedom. In other words, for each row in the ANOVA table divide the SS value by the df value to compute the MS value.

Each F ratio is computed by dividing the MS value by another MS value. The MS value for the denominator depends on the experimental design.

Calculating a P value from F and the two degrees of freedom can be done with a free web calculator or with the =FDIST(F, dfn, dfd) Excel formula

The details of multiple comparisons are explained in this document.