What is the difference between correlation and linear regression?

When investigating the relationship between two or more numeric variables, it is important to know the difference between correlation and regression. The similarities/differences and advantages/disadvantages of these tools are discussed here along with examples of each.

Correlation quantifies the direction and strength of the relationship between two numeric variables, X and Y, and always lies between -1.0 and 1.0. Simple linear regression relates X to Y through an equation of the form Y = a + bX.

*The X variable can be fixed with correlation, but confidence intervals and statistical tests are no longer appropriate. Typically, regression is used when X is fixed.

As an example, let’s go through the Prism tutorial on correlation matrix which contains an automotive dataset with Cost in USD, MPG, Horsepower, and Weight in Pounds as the variables. Instead of just looking at the correlation between one X and one Y, we can generate all pairwise correlations using Prism’s correlation matrix. If you don’t have access to Prism, download the free 30 day trial here. These are the steps in Prism: 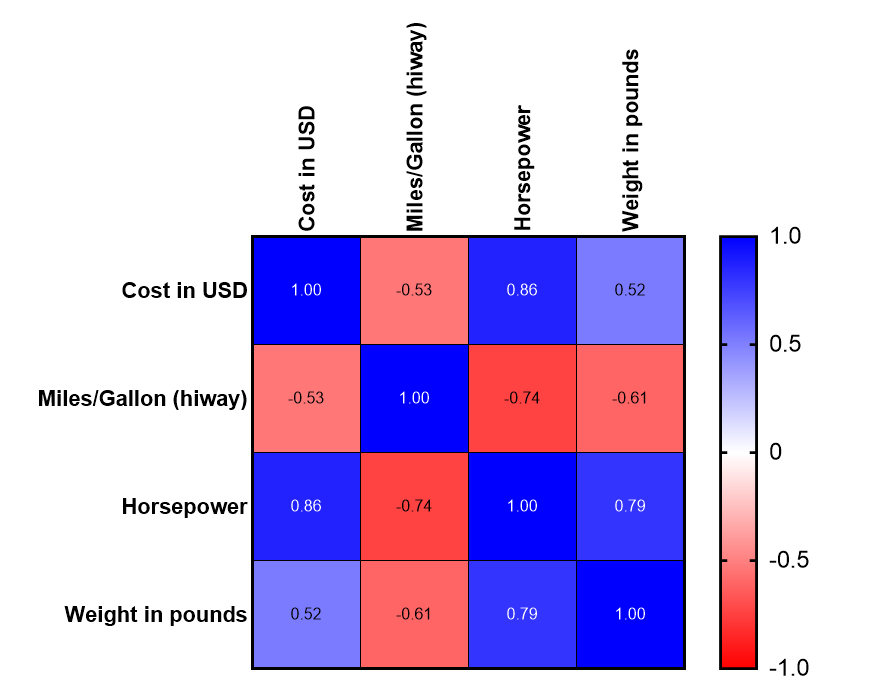 The Prism correlation matrix displays all the pairwise correlations for this set of variables.

When interpreting correlations, you should be aware of the four possible explanations for a strong correlation:

The strength of UV rays varies by latitude. The higher the latitude, the less exposure to the sun, which corresponds to a lower skin cancer risk. So where you live can have an impact on your skin cancer risk. Two variables, cancer mortality rate and latitude, were entered into Prism’s XY table. The Prism graph (right) shows the relationship between skin cancer mortality rate (Y) and latitude at the center of a state (X). It makes sense to compute the correlation between these variables, but taking it a step further, let’s perform a regression analysis and get a predictive equation. 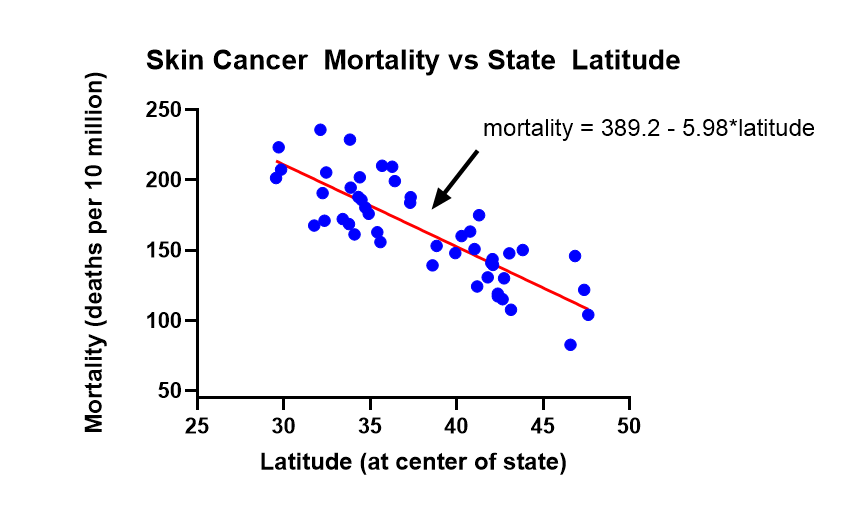 The relationship between X and Y is summarized by the fitted regression line on the graph with equation: mortality rate = 389.2 - 5.98*latitude.  Based on the slope of -5.98, each 1 degree increase in latitude decreases deaths due to skin cancer by approximately 6 per 10 million people.

Since regression analysis produces an equation, unlike correlation, it can be used for prediction. For example, a city at latitude 40 would be expected to have 389.2 - 5.98*40 = 150 deaths per 10 million due to skin cancer each year.Regression also allows for the interpretation of the model coefficients:

In summary, correlation and regression have many similarities and some important differences. Regression is primarily used to build models/equations to predict a key response, Y, from a set of predictor (X) variables. Correlation is primarily used to quickly and concisely summarize the direction and strength of the relationships between a set of 2 or more numeric variables.

The table below summarizes the key similarities and differences between correlation and regression.

Test your understanding of Correlation and Regression

Which tool, correlation or regression, would you use in each of these scenarios: