What is the difference between ordinal, interval and ratio variables? Why should I care?

In the 1940s, Stanley Smith Stevens introduced four scales of measurement: nominal, ordinal, interval, and ratio. These are still widely used today as a way to describe the characteristics of a variable. Knowing the scale of measurement for a variable is an important aspect in choosing the right statistical analysis. 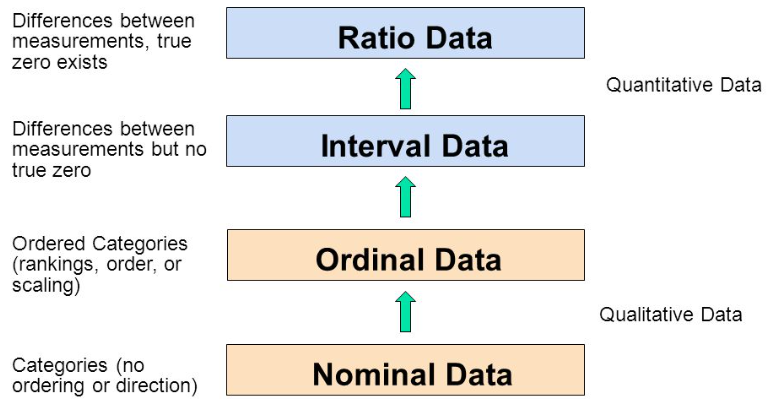 A nominal scale describes a variable with categories that do not have a natural order or ranking. You can code nominal variables with numbers if you want, but the order is arbitrary and any calculations, such as computing a mean, median, or standard deviation, would be meaningless.

Examples of nominal variables include:

An ordinal scale is one where the order matters but not the difference between values.

Examples of ordinal variables include:

An interval scale is one where there is order and the difference between two values is meaningful.

Examples of interval variables include:

A ratio variable, has all the properties of an interval variable, and also has a clear definition of 0.0. When the variable equals 0.0, there is none of that variable.

Examples of ratio variables include:

When working with ratio variables, but not interval variables, the ratio of two measurements has a meaningful interpretation. For example, because weight is a ratio variable, a weight of 4 grams is twice as heavy as a weight of 2 grams. However, a temperature of 10 degrees C should not be considered twice as hot as 5 degrees C. If it were, a conflict would be created because 10 degrees C is 50 degrees F and 5 degrees C is 41 degrees F. Clearly, 50 degrees is not twice 41 degrees.  Another example, a pH of 3 is not twice as acidic as a pH of 6, because pH is not a ratio variable.

Learn more about the difference between nominal, ordinal, interval and ratio data with this video by NurseKillam

Note that sometimes, the measurement scale for a variable is not clear cut. What kind of variable is color? In a psychological study of perception, different colors would be regarded as nominal. In a physics study, color is quantified by wavelength, so color would be considered a ratio variable. What about counts?

There are occasions when you will have some control over the measurement scale. For example, with temperature, you can choose degrees C or F and have an interval scale or choose degrees Kelvin and have a ratio scale. With income level, instead of offering categories and having an ordinal scale, you can try to get the actual income and have a ratio scale. Generally speaking, you want to strive to have a scale towards the ratio end as opposed to the nominal end.

Test your understanding of Nominal, Ordinal, Interval, and Ratio Scales 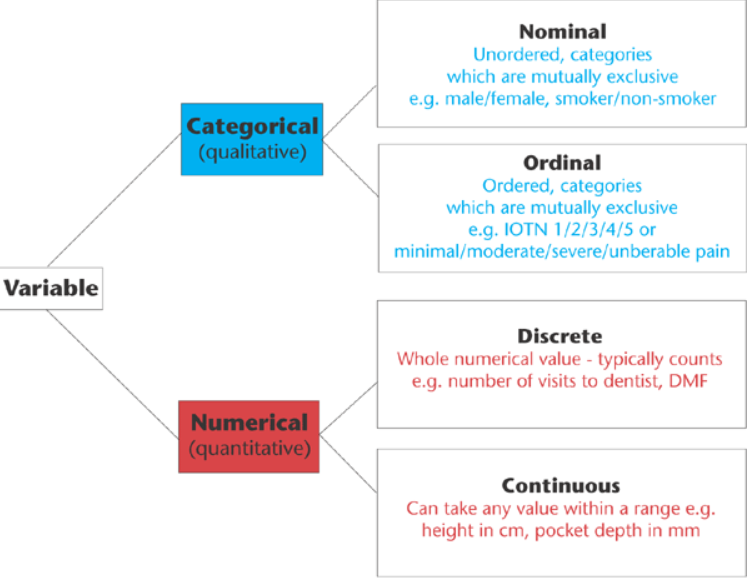 Test your understanding of Discrete vs Continuous

The list below contains 3 discrete variables and 3 continuous variables:

Note, even though a variable may discrete, if the variable takes on enough different values, it is often treated as continuous. For example, most analysts would treat the number of heart beats per minute as continuous even though it is a count. The main benefit of treating a discrete variable with many different unique values as continuous is to assume the Gaussian distribution in an analysis.

Start your free trial of Prism.