You've been asking, we've been listening

One of the most popular features released in Prism 9 was the "Pairwise Comparisons" feature that introduced the ability to automatically add the results of multiple comparisons tests onto the graphs of the analyzed data. In Prism 9.4, we've expanded the analyses that can be used with this feature to include the Multiple t tests (and nonparametric tests) analysis. This analysis will perform a separate test (unpaired or paired, parametric or nonparametric) for each row of the data table, and offers a number of different techniques to adjust the statistical results to account for the total number of tests being performed.

After performing this analysis, a single click of a button will allow you to automatically plot these results directly onto your graph!

Your favorite feature, now with more customization and flexibility 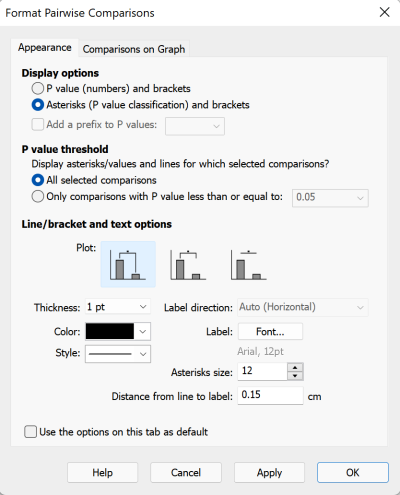 After the initial release of the "Pairwise Comparisons" feature, we got a lot of feedback about things that could be improved with this feature. And we've delivered on a lot of these requests. The Format Pairwise Comparisons dialog has been updated and improved to make it easier to get the visual representation of your analysis results that you want, and to customize its appearance even more.

When adding Pairwise Comparisons, one of the first choices to make is whether to show numeric P values or the associated P value summaries ("ns" or asterisks that categorize the numeric P values). Choosing to display numeric P values is often more informative that simply including the corresponding summaries. However, simply adding the appropriate number above the bracket on the graph wasn't always very visually appealing. As a result, we added the option to include prefixes in the bracket labels when displaying numeric P values. You can choose from the built-in "P =" or "p =" prefixes (depending on your style preference), or enter your own custom prefix. Note that Prism will be smart about how it handles the equals sign at the end of a prefix. If the prefix is "P =" (for example), and the numeric P value is reported as "<0.0001", Prism will automatically drop the equals sign so that the bracket label is displayed as "P < 0.0001"

Once you've got the text the size that you want it, there's still the question of how far that text should be placed from its associated bracket. Use the "Distance from line to label" controls to very precisely adjust this distance and fine-tune the final appearance of your graph.

Making sure your graphs are clear and accurate

For better or worse, bar graphs are commonly used to summarize groups of data. In general, we always recommend showing the underlying data (individual data points) when it's possible as this provides a much better depiction of how the data are distributed compared to a bar that only displays the mean or median of the underlying data. However, any time bars are used on a graph, it's a good idea to make sure that the baseline for the bars is zero. This ensures that the height of the bar is proportionate to the value that it represents (the mean or median of the underlying data).

In previous versions of Prism, the default appearance for the "Scatter plot with bar" graph type didn't rely on this rule of setting the bar baseline to zero. Thus, while the scatter plot did a good job of displaying the distribution of the data, comparing the height of the bars may have been misleading. Other graph types (like the standard Column bar graph) did default to displaying the bars with a baseline of zero. In Prism 9.4, we've updated the default way that we plot all graphs with bars to ensure that the axis range for these graphs always includes zero (you're still able to customize the baseline or scale of the axis for bar graphs, but we think that having a zero baseline by default is the right choice).