HomeUpdatesPrism 9: Taking your analyses and graphs to higher dimensions

Prism 9: Taking your analyses and graphs to higher dimensions 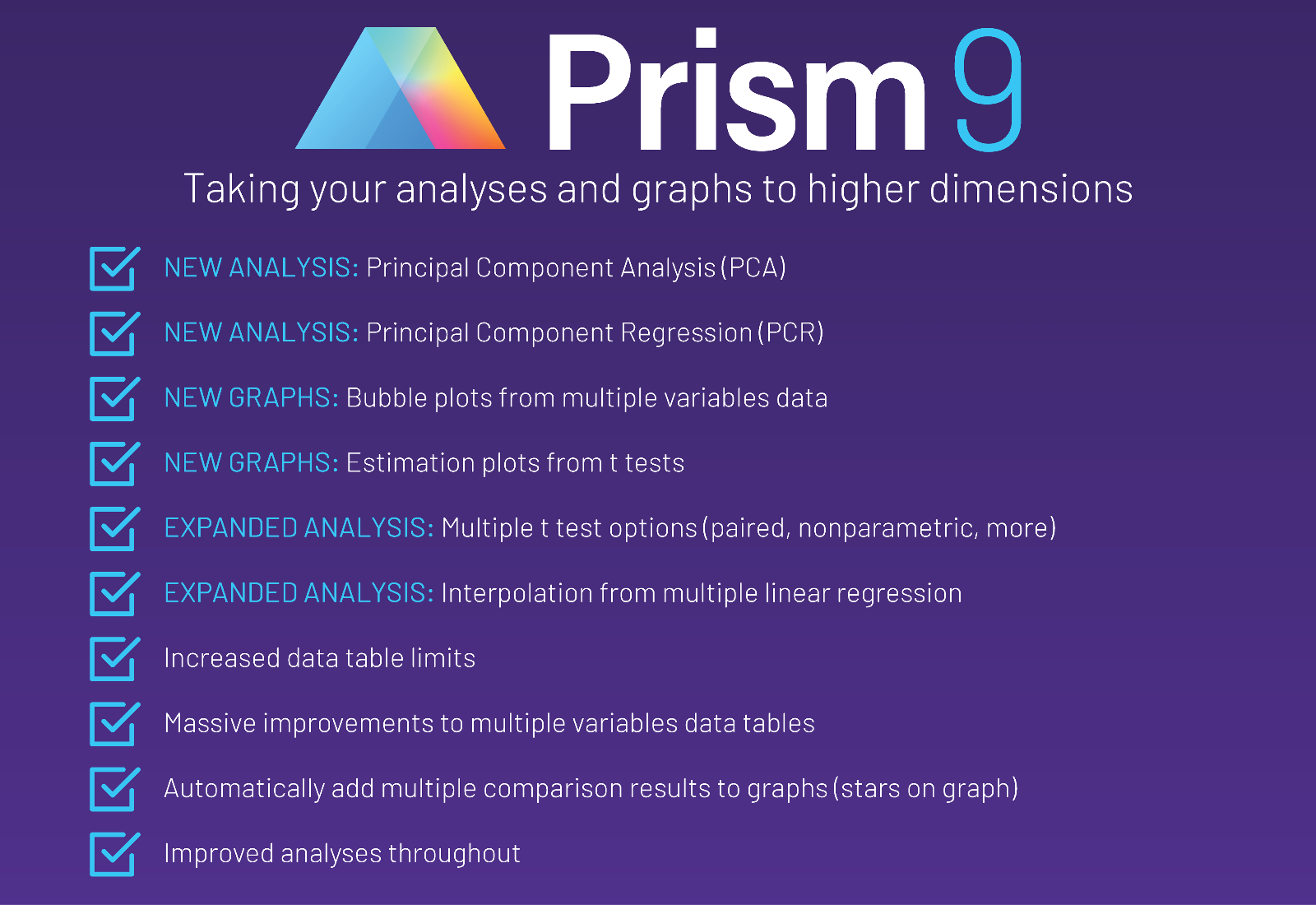 Data on a higher dimension!

Often times in research we find ourselves with an abundance of information on different variables from our experiments. As a simple example, imagine measuring the blood pressure of individuals after giving them either an experimental drug intended to reduce blood pressure or a placebo. It's likely that in addition to the recorded blood pressure measurements, you also recorded a wealth of information on each subject's age, height, weight, gender, race, and any number of other potential variables.

Numerous statistical techniques are designed to analyze this sort of "multiple variables" data, such as multiple linear regression and multiple logistic regression. Using these sorts of "multiple variables" analyses means you can explore the outcome of interest without wasting any potentially useful information. In order to facilitate this increased density of data information, Prism offers our Multiple variables data table to house data in a standard data structure that is used almost universally by other statistics software and packages out there (such as R, SPSS, and MATLAB). In this format, each column represents a different variable, while each row represents a different subject (measurements of each variable for each subject get placed into their appropriate column on that subject's row).

Note: the figure above shows PCA on two dimensions as a visual example. PCA in Prism can be performed on HUNDREDS of variables!

Sometimes, the amount of variables collected far outweighs the number of subjects that were available to study. Consider gene expression studies in which expression levels of hundreds or thousands of different genes were measured from subjects divided into two groups: a treatment group and a control group. There may simply be too many variables to fit a model to the data. But selecting some variables to exclude from the analysis is simply throwing information away that could be useful! PCA is a technique of "dimensionality reduction" that can be used to reduce the number of required variables while eliminating as little information from the data as possible.

Additional features available within PCA include:

Adding new dimensions to your graphs

Create Bubble Plots directly from raw data, encoding variables for symbol position (X- and Y-coordinates), size, and fill color. Note that both symbol color and symbol size can be defined using a categorical (grouping) OR a continuous variable.

On this graph, over 100 countries are shown as individual circles. The X-coordinate of each circle represents that country's GDP (PPP), while the Y-coordinate represents the average life expectancy at birth. The size of each symbol is proportionate to the population of the country it represents (with the two largest symbols representing China and India, respectively). Finally, the color of each symbol represents the continent in which the country is located. This final variable (color) in this case is a categorical variable, but color in Bubble Plots can also be defined by continuous variables:

In this graph, the X-coordinate, Y-coordinate, and size of the symbols is the same as before. However, now the color of the symbol represents that country's birth rate per 1000 individuals on a continuous scale. Prism also now has semi-transparent color schemes built in so that overlapping symbols can be more clearly seen.

Because you asked for it. Need we say more?

Simply perform an appropriate analysis with multiple pairwise comparisons. Then click once to automatically add these results to the graph. To customize these lines and asterisks, simply click the toolbar button again. Make adjustments to the data or the analysis, and the results displayed on the graph will update automatically. But remember, P values are only a part of the story. Don't forget to report effect estimates (for example, mean differences with 95% confidence intervals!) as well.

P values added to demonstrate relationship between 95% CI of difference of means and P value. If the 95% CI includes zero, the P value will be less than 0.05. Looking at the 95% CI is more informative than P values alone.

Perform a t test, and Prism will now automatically create an Estimation Plot of the results. On this graph, the raw data from both groups will be plotted on the left Y-axis. On the right Y-axis, the difference of the group means will be plotted along with its 95% confidence interval. This visualization provides more information than a P value alone, as it shows how wide the 95% CI is in addition to showing if the 95% CI includes zero (if the 95% CI includes zero, the P value will be greater than 0.05; if the 95% CI does NOT include zero, the P value will be less than 0.05).